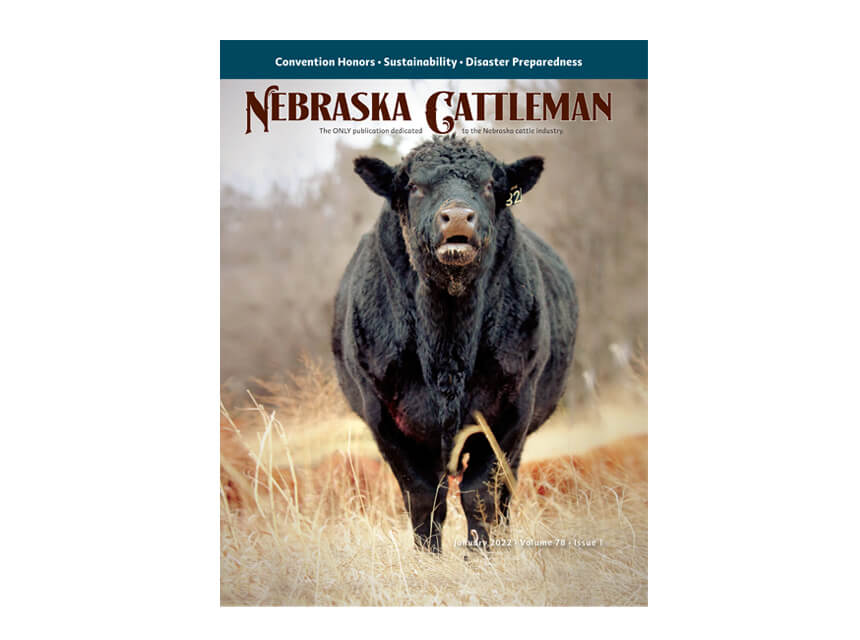 Through the years and the changes with this publication, it wasn’t only important that BluePrint Media continue the legacy of quality editorial, design, layout and production services, but stability, flexibility and adaptability as staff and leadership changed within Nebraska Cattlemen. In addition to custom publishing services, BluePrint also serves as a consultant to evaluate and manage printing costs, streamlines the magazine production process, provides a digital issue of Nebraska Cattleman for further reach, and assists Nebraska Cattlemen staff with materials beyond the printed magazine.

Advertising sales for Nebraska Cattleman have had their share of highs and lows, with particular highs in the 1990s, a lull in the early 2000s and a healthy comeback since 2007 when the current Advertising Sales Rep Amber Coleman was hired. The BluePrint Media team work closely with the advertising sales rep to keep a finger on issues advertisers are interested in as well as editorial that could possibly coincide with advertising sales. Further, in 2010 the Nebraska Cattlemen Board of Directors, with support from BluePrint Media, voted to expand the magazine’s circulation from approximately 7,000 to 15,000.

With an expanded circulation to both Nebraska Cattlemen members and non-members, the editorial goal of Nebraska Cattleman is to educate and inform its readership about the Nebraska cattle industry. BluePrint Media works with Nebraska Cattlemen staff, academia and freelance writers with a wealth of knowledge in the industry to create original, unique editorial that include topics like marketing, genetics, nutrition, forage and pasture management, animal health, personality profiles, coverage of Nebraska Cattlemen activities, and comments on issues important to producers not only in Nebraska, but across the United States.

While Bard began her role as advertising coordinator and designer, the role of full publication production and editor has presented a host of new responsibilities over the years for the entire BluePrint Media team. The BluePrint Media team has worked with a number of Nebraska Cattlemen staff and leaders over the years to assist in evaluating industry trends, needs and opportunities, and listened as Nebraska Cattlemen leaders conveyed their goals, including reaching a larger audience and remaining a viable print publication in the digital age.

BluePrint Media’s custom magazine publishing services are tailored to each client. Our step-by-step process begins with an annual review and creation of an editorial calendar, media guide and annual production schedule. Production of each issue involves a structured and systematic creation and review of editorial, graphics, images, advertisements, and other materials and content. Weekly review meetings keep people and schedules on track and deadlines met.

Our proofing and review process ensures that each piece of content is seen by numerous sets of eyes so nothing gets missed. Our copy editors review each issue, word-by-word, and instill a level of excellence that only comes through years of experience and industry knowledge. Utilizing our printer’s online proofing system is critical to ensuring that the final product meets or exceeds our clients’ expectations. Nebraska Cattlemen’s data manager keeps track of circulation and coordinates each issue’s distribution with the printer so readers receive the magazine in a timely manner.

BluePrint Media was also helpful in moving Nebraska Cattleman into the digital age by helping produce an interactive, HTML-5 digital, flip-book version of each issue for distribution on social media, via eblasts and hosted on the nebraskacattlemen.com website.

Through more than 30 years of continual collaboration with Nebraska Cattlemen staff and leadership, BluePrint Media has brought new ideas, innovations and processes to the custom magazine publishing service. We would love to meet with you to discuss goals implement new ideas to help your publication grow and expand.

Under our direction, BluePrint Media has helped Nebraska Cattleman:

We also use third-party cookies that help us analyze and understand how you use this website. These cookies will be stored in your browser only with your consent. You also have the option to opt-out of these cookies. But opting out of some of these cookies may have an effect on your browsing experience.